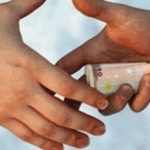 An initial inquiry into a list of 2,062 Greeks with $1.95 billion in deposits in the Geneva, Switzerland branch of HSBC bank that has caused a political furor shows many are suspected of tax evasion, the newspaper Kathimerini reported.
The list is being examined by the financial crimes squad (SDOE)and investigators have already reportedly found that many of the depositors can’t reconcile large deposits with their incomes.
Kathimerini said the amount of suspected tax evasion is expected to reach dozens of millions of euros while a number of those holding deposits are expected to face charges once the SDOE probe is concluded.
Former finance minister George Papaconstantinou is facing questioning over whether he removed the names of three relatives from the so-called Lagarde List, named for former French finance minister Christine Lagarde now head of the International Monetary Fund, of Greece’s international lenders. She gave it to him in 2010 but he said it disappeared.
He has denied altering the list but was ejected from the PASOK Socialist party by current leader Evangelos Venizelos, who followed him as finance minister and also had access to the list and is being blamed by Papaconstantinou for framing him. Both served under former Premier and previous PASOK leader George Papandreou, now a Member of Parliament and lecturer at Harvard.
The major opposition party Coalition of the Radical Left (SYRIZA) said both Venizelos – who Papaconstantinou suggested may have doctored the list – and Papandreou should be investigated too but that could undermine Prime Minister Antonis Samaras’ shaky coalition of his New Democracy Conservatives and its partners, PASOK and the Democratic Left and unlikely to get the approval of the Parliament the government controls.