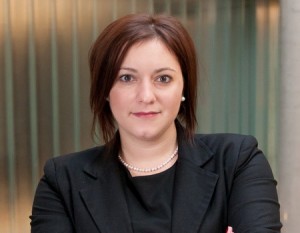 The first electronic ID identifying the owner or user of a device by measuring their heartbeats via fingertips is not a sci-fi technology of the future but rather the product of the joint work of Dr. Foteini Agrafioti and Dr. Francis Boi completed under the supervision of Professor Dimitrios Hatzinakos in the University of Toronto.

The 28-year-old researcher from Kozani, Greece, graduated from the University of Crete in Chania and continued her studies in electrical and computer engineering with a scholarship at the University of Toronto. Agrafioti developed the new identification and authentication technology in her doctoral thesis, which takes international biometric systems one step further into the future.

The international pioneering research led to a smart software that can be used in military, healthcare and safety applications, all electronic devices, video games, tablet computers, cell phones, firearms and automobiles.

The Heart ID software enables electronic devices to exclusively open by recognizing and authenticating the heartbeat of the user, when one touches the device with their fingers. The devices will automatically lock again when removed from the user’s hands. The software technology records everything from the enrolled user’s heartbeat to their breathing patterns, blood pressure and other information and data shaping one’s clinical identity.

Since it is virtually impossible to steal, mimic, or circumvent the human heartbeat, the new biometric system promises to offer solutions to any security problems that have emerged from other identification and authentication processes, including fingerprints and facial identification, as well as passwords.

Agrafioti’s Heart ID research drew the attention of the university community of Toronto, and Agrafioti and fellow Toronto University graduate Karl Martin found their own company Bionym to further elaborate on the current research on cardial signals and boost Canadian exports in the future.