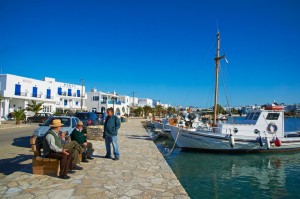 The travel app Triposo has released its 2013 TripGeist, an algorithmic look at what the company says will be popular destinations in the coming year and among the seven places recommended is the Greek island of Antiparos.
For tourists looking for a quieter Greek getaway, Antiparos is a small holiday paradise located southwest from Paros island in the Cyclades chain. The calm cycladic landscape, with scattered churches, a famous cave and the Enetic castle, is ideal for sightseeing. The variety of the coast, where golden sand beaches give way to small remote bays with blue-green waters, offers magical moments, the locals say.
The company finds its destinations using several tools, including examining the number of images taken of a certain place on the web, the number of views on the Wikipedia article, the location’s popularity on social media and the popularity of different outdoor activities. Each destination picked was “trending” higher at the end of 2012 than they were in early 2012, leading Triposo to believe that they’ll be hotspots in 2013.
Other than Antiparos, other hot destinations are likely to be Jasmund National Park in Germany, Vieques in Puerto Rico, Ko Tao in Thailand, Sigiriya in Sri Lanka, Pittsburgh in the U.S. and Tenby in Wales.
(Source: Huffington Post)