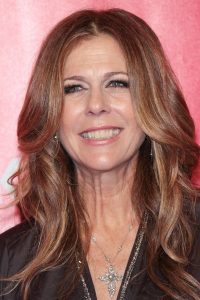 Actress/singer Rita Wilson made an appearance on “Conan” last week, and talked about her and Tom Hanks’ awkward meeting with Prince Philip, Duke of Edinburgh.

While visiting Buckingham Palace, Wilson and Hanks were given a rundown on the appropriate code of behavior when engaging with the Royal family. A well-known rule is “don’t speak until spoken to,” so after Wilson finally shook hands with the Prince and exchanged words, she decided to spark a conversation about their shared Greek background being that he was formerly known as Prince Philip of Greece.

After saying to the Prince, “I believe that you and I have some shared common heritage, I’m half-Greek,” he replied, “Oh, sorry for you.”

Getting royally dissed, Wilson wasn’t sure what to make of his response. Apparently, the Prince has a very odd sense of humor and embarrassed the Greek-American, who turned bright red after he walked away from her.

Check out the interview and let us know what you think: