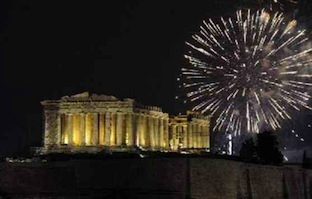 Greece welcomed the New Year with wishes for a swift exit from the severe debt crisis which has brought hardship to Greek people over the past three years.
Amid painful austerity and recession political leaders and citizens on the streets of Athens and across the country exchanged wishes for an imminent return to growth in the coming months and a better future for suffering Greek peoples.
As the City’s Philharmonic Band and local music groups performed traditional songs, spectators embraced each other wishing the entire world all the best during the New Year.
Celebrations in Athens ran on a limited budget due to the crisis for a third year in a row. However, Greeks faced 2013 with plenty of decisiveness to continue the struggle to tackle problems and rebuild the ailing economy, despite wide-spread pessimism.
“I am absolutely certain that we can reverse the current situation… that this adventure will end,” Greek President Karolos Papoulias stressed in his message for New Year’s Eve.
“In 2012 we proved wrong the worst-case scenarios and in 2013 we will exceed the best-case scenarios,” Greek Prime Minister Antonis Samaras added, acknowledging that the New Year will be tough.
He voiced optimism, however, that with unity Greeks will leave well back in the past the threat of chaotic default and possible exit from the euro, and move ahead on the path of recovery and prosperity again.
(source: Xinhua)