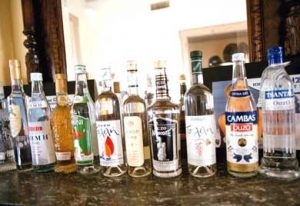 Just as increased taxes on restaurants and bars have driven down sales and revenues, a big hike in taxes on alcoholic drinks in Greece in a desperate bid to raise money has also backfired, sending tax revenues down and cutting consumption in half.
The tax hike not only fell far short of the government’s plans to make more money off people’s drinking habits, with revenues declining to levels last seen in 2009, but has seen the tax receipts plummet to levels below those three years ago.
That was before a 10 percent increase in the Valued Added Tax (VAT) up to 23 percent, and a second tax called the special consumption tax on alcoholic beverages (SCTAB) which was raised 125 percent from 2009 levels.
Adding to the problems is that Greeks are turning to buying liquor cheaper from unlawful sources, depriving the government of even more potential revenue because of the hope that higher taxes would bring in more money.
According to data recently released by the Finance Ministry, in the first half of the year state revenues from the SCTAB amounted to 137.1 million euros, ($181.9 million) almost the same as in the first half of 2009, when revenues from the special consumption tax had come to 133.8 million euros ($177.5 million).
The latest data from the Hellenic Association of Drinks Distributors (ENEAP) showed that from January to October 2012, state revenues from the receipt of SCTAB and VAT added up to 224.6 million euros, ($298 million) well below the 2009 level. In the same period in 2011 they had come to 290.7 million euros ($385.7 million) in 2010 to 307.1 million euros ($407.5 million) and in 2009 to 258.8 million euros, ($343.4 million).
The higher tax rate worked only until the end of last year but the deepening recession – and with another $17.45 billion spending cut and tax hike plan coming – have driven revenues to the bottom of the barrel.
The unrelenting high taxes, with VAT and SCTAB accounting for 57 percent of the retail price of popular alcoholic drink, have resulted in a decline in alcoholic beverage consumption from 10.76 million hectoliters (284.06 million gallons) in the first six months of 2009 to just 5.6 million hectoliters (147.84 million gallons) in the first half of this year.
Besides the reduction in revenues for the state, the drop in consumption, which is attributed to a great extent to the increase in taxes, has resulted in the loss of some 10,000 jobs in the sector in 2010 alone and a reduction in the sector’s added value to the tune of 387 million euros in the same year.