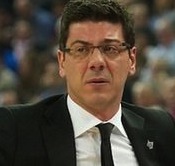 Greek Fotis Katsikaris has been named coach of Russia’s men’s national team and will continue to manage Spanish club Bilbao Berri, the country’s basketball federation (RBF) said on Monday.
The agreement with the RBF, which runs through to the 2016 Olympics in Rio de Janeiro, allows Katsikaris to coach Russia for a few months during the off-season before returning to his full-time job with Bilbao.
“I won’t break any rules,” he said, referring to the Spanish league’s law prohibiting holding two jobs simultaneously.
“Each year on June 30, I’ll break up my contract with Bilbao before start working in Russia, then I can return to Spain and re-sign my club deal again.”
Katsikaris, 45, replaced American-born Israeli David Blatt, who quit as Russia coach in October after guiding his team to the Olympic bronze medal in London.
Katsikaris, who has also coached Valencia as well as Greek clubs AEK and Aris, led Bilbao to a runners-up finish in the 2011-12 Spanish league behind Barcelona and an automatic place in the Euroleague – Europe’s premier club competition.
(source: Reuters)