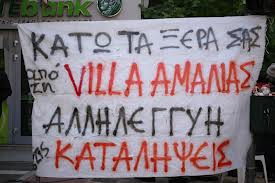 Dozens of Greek police raided the well-known squaters villa Amalia, an old building constructed in 1862 which had been occupied for 22 years. The building was surrounded by police who entered the villa and detained eight people. The police operation was steered by the Public Order Minister Nikos Dendias.
“The Greek police force has an obligation (to act) under the constitution and the law,” said Dendias. “I repeat, it also has the orders of the prime minister to restore common sense, to restore legality.”
Reports say police found 1,500 empty bottles and a flammable liquid, which was believed to be destined for Molotov bombs, according to the government.  Villa Amalia used to host the former 2nd High School for boys in Athens.
In 1990, a group of young people entered and occupied the abandoned building to host punk culture. The old abandoned building turned into a cultural center, opened to everyone, hosting plenty of entertaining and educational programs and actions.
Plenty of concerts, theatrical actions and various political events have been held in Villa Amalia, along with programs for children, theatrical groups, modern dance groups, music events, screenings, puppetry, book store, coffee place, print shop. Various foreign language, H/Y and martial art groups as well as educational groups  also offered entertainment and creative activities to all visitors.