Greek Music Heading to SxSW Festival for the First Time 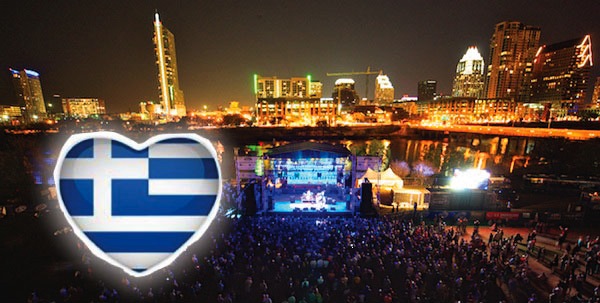 (Additional reporting by Diane Douvry) – Coming up on its 26th year, the SxSW (South by Southwest) Music, Film and Interactive Festival will showcase Greek music for the first time in 2013. The Greek presence at the top cultural festival in the world is organized by a private initiative lead by Hollywood-based Criteria Entertainment.

The 10-day event, which takes places in Austin, Texas from March 8-17, highlights some of the best in music, film and web. SxSW has also been a key factor in defining Austin as a city where new music and bands are discovered.

Thousands of submissions are received yearly by the festival. Musicians, films and interactive businesses are narrowed down by SxSW and brought in by invitation only. With musical presence from other European countries, like Turkey, Spain and most notably the U.K., Greece has never participated. For 2013, Hollywood-based company Criteria Entertainment is changing that.

“Sounds of Greece” is an idea that was conceptualized by two young Greek employees of Criteria. They approached one of the company’s founders, Diana Rodriguez, with a proposal to expose modern Greek music to the thousands of attendees at SxSW. Rodriguez, a noted businesswoman in the music industry, liked the pitch and considered it a good opportunity to shine a more positive light on hard-hit Greece.

Spending a lot of time researching the latest musicians to represent the country at one of the top cultural festivals in the world took some work, but Criteria selected 10 acts to submit to SxSW, three of which have been chosen and invited so far. With more announcements expected, Imam Baildi, Keep Shelly in Athens and Stereo Mike are confirmed to perform in Austin this coming March.

“The response from the bands has been amazing. They’ve been very easy to work with and very enthusiastic about this opportunity,” says Rodriguez.

“It’s not only about their music and their growth internationally, but also about showing a different face for Greece…we very rarely see the music that is not in the traditional [form], so being able to show that music and showcase a new and fresh face for the world is very interesting.”

The acts are a mix of rock, alternative, pop, urban, and electronic music. Some perform in English, Greek, or both, even blending Greek rhythms like rembetika and other folk music into their sound.

“It’s not about the language; it’s about the music,” Rodriguez added. “It’s one of the biggest showcases in the world, for a record label, media, publishers…the audience is there.”

Bands and musicians that have played the festival in previous years include Kimbra (she collaborated with Gotye on the hit “Somebody That I Used to Know”), John Mayer, who signed with his first label after performing at SxSW in 2000, and James Blunt, who was discovered while playing a small venue in Austin. The Beastie Boys, Fiona Apple, Bruce Springsteen, and many others, have also appeared at the event.

Currently in the midst of attracting sponsors to help bring the musicians over from Greece, Criteria is looking forward to giving Greek music a chance on an international level. With SxSW just a few weeks away, Rodriguez points out, “It’s about the passion and the dream of these bands and how do we help them to get there. They’re talented and they do need the help and support.”

Greek Reporter is an official Media Sponsor of “Sounds of Greece” at SxSW.