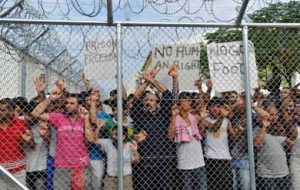 Human rights group Amnesty International has blasted Greece’s treatment of immigrants and asylum seekers, joining in a chorus of criticism against an ongoing roundup of foreigners in the country unlawfully and the conditions in which many are being held while awaiting deportation.
Amnesty said that the way Greece treats migrants and those seeking asylum in a flight from countries where they say they are not safe is making a “mockery” out of the Nobel Peace Prize awarded the European Union. Greece has complained, however, that it’s being inundated with waves of illegal immigrants as the southernmost entry point for the EU and that little help has been offered to help deal with the influx.
Asylum seekers and migrants face inhumane conditions in Greece, the group’s report claimed, saying that authorities are too slow in processing asylum claims, resulting in long waits in overcrowded facilities and that immigrants are being assaulted on the streets. Some have blamed the neo-Nazi Golden Dawn party for attacks, but the party denies it despite its vehement anti-immigrant platform.
“Greece’s failure to respect the rights of migrants and asylum-seekers is taking on the proportions of a humanitarian crisis,” said John Dalhuisen, Europe and Central Asia Program Director at Amnesty International on a statement released Dec. 20. “Against a backdrop of sustained migratory pressure, profound economic crisis and rising xenophobic sentiment, Greece is proving itself incapable of providing even the most basic requirements of safety and shelter to the thousands of asylum seekers and migrants arriving each year,” he added.
The government of Prime Minister Antonis Samaras, whose campaign earlier this year before the June 17 elections included promises to rid Greece of illegal immigrants, has been conducting ongoing sweeps, hunting for illegal immigrants to deport them. As few as 1 in 10,000 applicants receive asylum as they have to before a police controlled board amid criticism that many in the department support the anti-immigrant stance of Golden Dawn and the roundup of immigrants.
The group claims Greece is using the poor conditions of detention facilities as a deterrent to prevent more refugees from entering the country and noted that in one case an asylum seeker from Africa tried for months to apply for asylum status, but ended up being arrested in a sweep operation and detained in August. Though his claim was finally registered in October, he is still being held.
Other European countries, alarmed at the Greek system and what other human rights groups have criticized as the shameful conditions in which immigrants are held in detention centers, are refusing to send asylum seekers back to Greece. EU law says immigrants can only seek asylum from the country in which they enter Europe even if they move on to other countries.
“The current situation in Greece is totally unworthy of the Nobel Peace Prize winning European Union and so far below international human rights standards as to make a mockery of them. Greece needs help but it must also accept its own responsibilities,” Amnesty added.
AI detailed the failure of Greece to process asylum applications properly, taking on just 20 cases each week, and to confront incidents of racism. “Greece’s failure to respect the rights of migrants and asylum-seekers is taking on the proportions of a humanitarian crisis,” said Dalhuisen.
AI said that recent police sweep operations had led to asylum seekers, including unaccompanied minors, being detained in overcrowded and unhygienic conditions. “The Greek authorities must ensure that immigration-related detention is used only as a last resort and that they prohibit the detention of unaccompanied children in law and end it in practice,” said Dalhuisen.
But he said other European countries have to do more too. He said they share “responsibility for processing asylum applications and supporting asylum seekers more equally among member states.” The organization said that in some cases, Greek authorities were also pushing back migrants crossing from Turkey, including by puncturing a rubber dinghy they were sailing in.
Twenty immigrants seeking to enter Greece died earlier this month when their boat sank off the island of Lesbos on their way from Turkey. An anti-immigrant fence along the Turkish border has also just been finished to keep out immigrants.
In October, Public Order Minister Nikos Dendias unveiled a draft presidential decree to set up a specialized unit within the Greek police force to deal with racist violence. But Amnesty International said it didn’t go far enough to ensure that crimes in which victims fear police arrest and detention are also properly investigated and prosecuted.
Golden Dawn claims the immigrants are criminals, murderers and rapists and are responsible for the increase in crime during a crushing economic crisis, although Amnesty argued that the country’s fiscal problems should not deter from humane treatment of immigrants, including those in the country unlawfully.
(Sources: BBC, Kathimerini)

Couples Divorce Over Vaccinating their Children in Rhodes