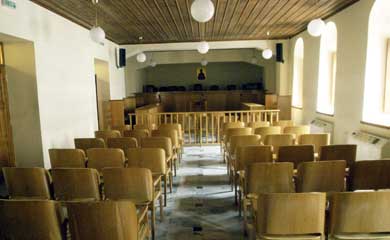 Angry over more pending pay and benefit cuts, Greek judges and prosecutors have voted to continue a work slowdown until Jan. 19, 2013 even as the delays have created a backlog of more than a million cases in the courts.
The newspaper Kathimerini reported that civil and criminal cases are piling up as the judges and prosecutors have limited how much work they are doing in protest over more austerity measures that have been imposed on civil servants.
By law, the judges cannot strike so instead are curtailing their work load and hours in a judicial system which already had limited working hours and where some cases have been delayed up to 10 years or more.
The job action is costing Greece untold millions of euros and delaying prosecution against tax cheats just as the government has said it will finally go after them. Other cases where the state could collect critically-needed funds are also on hold.
All the country’s courts have joined the walkouts apart from the Supreme Court and the Council of State, the country’s highest administrative court, which is pursuing legal action on behalf of its judges. They have rejected some government concessions aimed at getting them back to work.
Supreme Court President Rena Asimakopoulou and Supreme Court prosecutor Yiannis Tentes urged their colleagues before the vote in a bid to change their mind but failed. Tentes had asked his colleagues to “lower their gaze to society and heed the demand of citizens for judicial functionaries to contribute to curbing tax evasion and widespread lawlessness.”