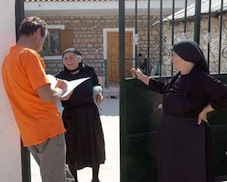 Official results of a census held in 2011 in Albania are unacceptable and unrealistic, the Orthodox Church of Albania has stated. The Democratic Union of the Greek Minority Omonoia has requested the Albanian government and the international community not to accept the published results.

Omonoia said it believes that the results have been falsified to the detriment of ethnic Greeks and other Orthodox minorities, Macedonians and Montenegrins. The Church announced that it would release an official statement that would be signed by Bishop of Tirana and Albania Anastiasie. Omonoia said that it will do a parallel census in order to prove that the released results are not realistic.

According to the official census results, Albania has a population of 2.8 million, of which only 24,360, or 0.54 percent, are Greek and that Greek is the language of only 0.15 percent of Albania’s residents. Media and certain officials claim that there are 300,000 Greeks living in Albania. The information that there are 8,000 of Roma and Cincars in Albania is also being questioned. Some 98.7 percent of the population speaks Albanian as their mother tongue, according to the survey taken in 2011.