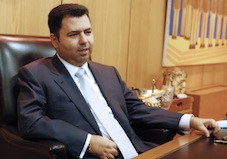 Prominent Greek businessman Lavrentis Lavrentiadis, who was arrested on Dec. 13 over his alleged involvement in a scandal involving the Proton Bank, in which he was the major shareholder, was taken to a psychiatric hospital on Dec. 14 as authorities arrested 17 more people in connection with the growing scandal.
Lavrentiadis, charged with embezzlement and fraud, was taken to the Dafni psychiatric hospital, after testifying for four hours before an investigating magistrate from a hospital bed yesterday following his admission to the Evangelismos Hospital in Athens.
He had been admitted there after citing health problems when police tried to arrest him. Lavrentiadis, who suffers from rheumatoid arthritis, issued a statement complaining that the decision to jail him overlooked his health problems and were based on a “biased” report by the Bank of Greece. “The justice system is responsible for anything that might happen to me now,” he said.
Meanwhile police sources told the newspaper Kathimeri indicated that 16 members of the businessman’s private security detail had been arrested including two policemen and two Coast Guard frogmen. Earlier on Dec. 14, a prosecutor issued an arrest warrant for publisher Petros Kyriakides, in connection with the alleged issuing by Proton Bank of some 700 million euros ($921.25 million) in bad loans. Police said three high-ranking Proton executives had also been arrested in connection with the same case.
Lavrentiadis was arrested at his home in a seaside suburb of Athens. He began his career in the chemicals industry and then moved into banking and media. A Greek prosecutor filed felony charges against him earlier this year in relation to the collapse of Proton Bank, a small Greek financial institution which made a series of questionable loans.
If convicted, he could face life in prison. Another 27 suspected associates, including Proton executives, also face trial. On Dec. 11, a court ordered the confiscation of Lavrentiadis’s property and assets, the court official and police source said. Proton became the first Greek bank to be effectively nationalized after it fell under a bank rescue fund set up by Greece and its international lenders.
Prosecutors last March charged Lavrentiadis and his associates with fraud, embezzlement, forming a criminal gang, money laundering and breach of faith stemming from loans believed to have been issued by Proton Bank. His name recently resurfaced as one of more than 2,000 Greeks appearing on the so-called Lagarde List of people said to have accounts in a Geneva branch of the bank HSBC.
(Source: Reuters)