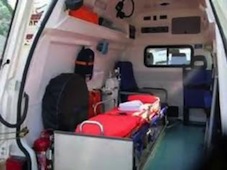 Two officials were killed in an ambulance fire on Crete when three oxygen cylinders exploded after the vehicle collided with a passing car with two women inside and overturned in an accident on the Heraklion – Rethymnon Highway on Dec. 11, authorities said.
The victims were identified as the director of Ambulance Services in Crete, Dimitris Vourvachakis, and the President of ambulance workers, V. Kelarakis. Panic prevailed at the scene, as passing drivers who stopped to help could not reach the victims trapped inside the burning ambulance.
Two Fire Department rescue vehicles quickly and crews extinguished the fire but it was too late to save the men trapped inside. Another person who was on board the ambulance, possibly a patient, was taken to a hospital.
(Source: Proto Thema)