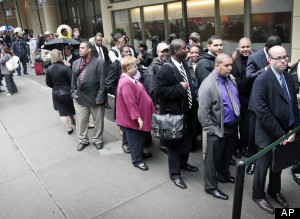 Nikos Chountis, a Member of the European Parliament for the far-leftist SYRIZA party, pressed European Commission officials why international lenders insisted on reducing unemployment benefits as part of austerity measures attached to bailouts.

Commission officials told Chountis that Greece’s unemployed receive less than those in other European Union. He said that last year only about one-fourth of Greece’s jobless received any benefits.

Commissioner Laszlo Andor told him that the benefit is only given for one year, that the self-employed are not eligible, and that a worker has to have 200 days of employment over two years to receive benefits upon losing a position.

In relation to other countries, especially Spain and Germany, the Commissioner responded that almost 59% of unemployed people receive benefit in Spain and 28.4% in Germany, where unemployment is much less. In Spain, the requirement is for 360 days of work in the previous six years.

He added that in Greece the benefit is 360 euros per month regardless of the beneficiary’s previous wage while in Spain it is based on 50-70 percent of the former salary, and in Germany it is 60 percent.