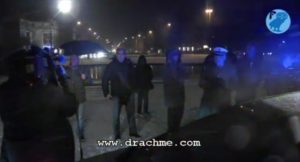 Greek Prime Minister Antonis Samaras’ visit to Bavaria in Germany, was met with a barrage of protest from Greeks living in Munich who protested that they don’t have schools for their children while he was boasting he had solved Greece’s economic problems.

Just outside Prince Charles Palace, before Samaras was to meet government officials, about 30 Greek migrants to Germany had gathered and yelled at him as he walked past. They said there are no Greek schools as the government has cut back on Diaspora programs during its crushing economic crisis.

“Mr. Samaras, our children do not have schools to go to for three months now!” a man shouted. Eventually, the prime minister turned his head for a couple of seconds toward the outraged protested, looked at the briefly and then turned his head away, dismissing them without an answer. Instead, he went instead and talked to officials for more than two hours, but not before one protester complained loudly that, “They are not at all interested.”

Samaras had talks with Bavarian Governor Horst Seehofer, and discussed Greece’s plan to buy back 30 billion euros of debt at a discount of more than 60 percent.  Samaras said that would help the country write down its debt by some 20 billion euros as demanded by international lenders in return for more bailout loans. He said that by Dec. 11, “One would be able to say with certainty that things have gone well.” He also said that Finance Minister Yiannis Stournaras, who accompanied him, was in contact with Eurozone leaders about the program.

Samaras’ visit was seen as another sign of the new thaw in Greek-German relations that started when Chancellor Angela Merkel visited Athens in October and was convinced of Athens’ commitment to painful reforms. “We want to support the Greek government and the Greek people, and help them gain economic growth and competitiveness,” Seehofer said at a press conference with Samaras.

Seehofer added the Greeks deserved deep respect for their achievements. “They are on a good way to overcoming the causes of the crisis,” he added. Samaras’ said he wanted international lenders and German officials to be patient as he pushed reforms and more of the pay cuts, tax hikes and slashed pensions they have demanded. “To force an upswing, we need blood and air, which keeps the economy alive, and that is liquidity,” Samaras said.