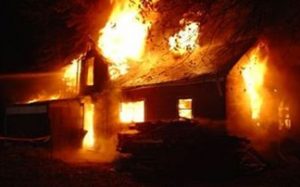 Another tragedy shocked Greece this morning. Three children age 5, 7, and 15 died in a fire inside their home in Mesoropi, a small village near the city of Kavala, Greece.
Authorities said that the younger boys died in the fire and their brother from smoke inhalation when he went back inside to try to rescue them. Their parents, grandparents, and three other siblings escaped.
The family was asleep when the fire started, apparently from a wood burning stove they were using instead of heating oil because fuel prices have increased 40 percent in Greece.
Ten people in total were living in the house, the three boys, their parents and their grandparents. With oil prices soaring in a crushing economic crisis that has seen many people take pay cuts, as well as tax hikes and slashed pensions, many Greeks are resorting to cheaper methods of trying to stay warm.
“They had oil heating. They put on a stove this year, as many other villagers did, because of the crisis. Things are very tight,” Vangelis Bozoudis, a resident of Mesoropi told the Associated Press.
When the priest of Mesoropi heard the news, he wondered “Should we throw our kids to Kaiadas?,” commenting on the government’s indifference toward younger Greeks. The Greek government recently reduced tax benefits for large families, which in combination with other austerity measures and higher gas and oil prices, have brought many poor families that reside in the cold areas of Greece to a dead end.