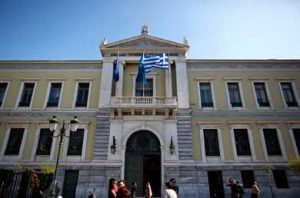 The Greek government will exempt the country’s struggling banks from a plan to use 10 billion euros ($12.9 billion) to buy back its bonds from investors at a big discount in a bid to write down debt by 20 billion euros ($25.8 billion) as the economy continues to flounder.
Officials also said that Dec. 7 would remain as the deadline for investors to agree to the voluntary scheme, but the newspaper Kathimerini reported it might be extended into next week. Greek banks earlier had said they would resist taking part, fearing legal action by their investors.
The announcement came as Greek banks were set to decide whether they wanted to participate in the plan that Finance Minister Yiannis Stournaras said was a “patriotic duty” for them, as they await a long-delayed 50 billion euros ($64.5 billion) injection of government funds after a previous administration imposed 74 percent losses on investors.
It was reported that the government would provide legal cover to protect the management of banks choosing to participate in the plan from possible lawsuits from shareholders who may suffer losses, the official said, without giving details.
Greek lenders hold an estimated 17 billion euros ($21.9 billion) of bonds out of the 63 billion euros ($81.4 billion) eligible for the buyback. They are expected to participate because they need the recapitalization funds that are due from a pending series of $56.7 billion in further rescue loans from international lenders that are the first in a second bailout of $173 billion.
The Troika of the European Union-International Monetary Fund-European Central Bank (EU-IMF-ECB) that is putting up the bailouts said the pending further aid could depend on a successful bond buyback.
Stournaras told Real News radio that the plan would involve the same mechanics as the Private Sector Involvement (PSI) that nearly wiped out many small bondholders, including those in the Diaspora, and pushed Cypriot banks into near-insolvency, requiring the government there to also seek a bailout. The PSI protected bank boards from lawsuits by investors who would suffer big losses.
Greek banks – already battered by the country’s debt crisis – have been hit further by fears that they would be forced to book losses from the buyback. The government is offering to pay only from 30.2-38.1 percent for its own bonds.
Prime Minister Antonis Samaras earlier exempted Greek pension funds holding more than 8 billion euros ($10.3 billion) and with Greek banks also out of the picture, the pressure has increased on other bondholders for a plan that would increase their losses.