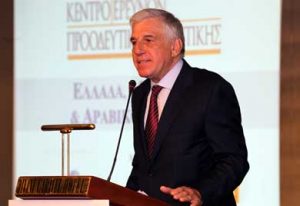 Two vehicles owned by former Defense Minister Yiannos Papantoniou, who is being investigated over claims made by a Greek newspaper that 12 military helicopters were acquired at an inflated price when he was in office, were targeted by handmade explosive devices, police said on Dec. 7. There was no report on whether they were detonated.
Authorities said the vehicles were outside his residence in the wealthy enclave of Kifissia in northern Athens. He came under question after the newspaper Real News reported that while he was the country’s top defense chief in 2003 that the office approved the purchase of the American-made Apache helicopters from Boeing for $593 million, but that the final price was $663 million, some $70 million higher. The purchase was made via a swap agreement arranged by Deutsche Bank.
A Parliamentary committee in charge of checking politicians’ origin of wealth forms, known as “pothen esches,” said it had asked auditors to probe the former minister’s records after a prosecutor told the panel that the name of Papantoniou’s spouse was on a list of Greeks with major deposits at a Geneva branch of HSBC.
Papantoniou is the second former defense minister from the PASOK Socialists to be ensnared in charges of using their office for personal gain. Akis Tsochatzopoulos is being detained in jail on charges of money laundering and stealing from defense contracts during his time in office from 1996-2001.