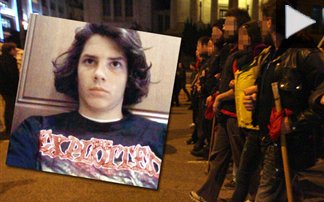 Greek riot police used tear gas Thursday to disperse youths throwing firebombs and stones during an Athens protest to mark the fourth anniversary of a deadly police shooting that triggered major disturbances.
No injuries or arrests were reported from the evening clashes, during a march by more than 1,000 students, left-wing groups and anarchists.
Alexandros Grigoropoulos, 15, was shot dead by police in central Athens on Dec. 6, 2008, sparking riots in Greek cities that lasted nearly three weeks.
The policeman convicted of the shooting was jailed for life in 2010.
Earlier Thursday, clashes also broke out at similar protests by secondary school pupils in Athens and Thessaloniki, the country’s second-largest city.
The teenagers threw Molotov cocktails and stones in Athens, where about 2,000 people marched to parliament chanting “cops, bastards, child killers.”
Three suspected rioters were arrested, police said, while a bystander’s clothing briefly caught fire after a firebomb exploded next to her. The woman escaped without injuries.
Police also said a clothing store was looted and a private armored security van was attacked during the brief clashes in the city center.
There were also clashes in Thessaloniki, where about 1,000 schoolchildren gathered.
(source: AP)