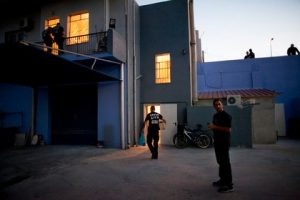 A bomb planted outside the office of the far-right Golden Dawn party outside Athens destroyed part of the building but no one was injured in the early morning blast on Dec. 4, police said.
The explosion, caused by a home-made explosive device that appeared to contain dynamite, occurred before dawn at the party’s office in the town of Aspropyrgos, authorities said.
The blast caused significant damage to a shop on the ground floor of the building and to the party offices on the first floor. It also blew out windows of several nearby stores, the Associated Press reported.
Golden Dawn, which has a virulently anti-immigrant stance and has been accused of attacking immigrants, won 18 seats in Parliament in June and some of its members, including lawmakers, have embarked on campaigns against blasphemy and pushed vehement nationalist positions, drawing fire from critics.
The party denies accusations that it is behind a wave of violent attacks against immigrants. It has also been accused of demanding lists of foreign children who attend daycare or kindergarten schools, and of pressuring local businesses to fire foreign workers and hire Greeks instead.
The PASOK Socialists, one of the three parties in the ruling coalition, has called for the party to be outlawed, even though it is legally in Parliament. Golden Dawn’s ascension in polls, to near 14 percent in some, has polarized Greek society between its critics and adorers, and some of its members recently clashed with Leftist opponents in a street battle.