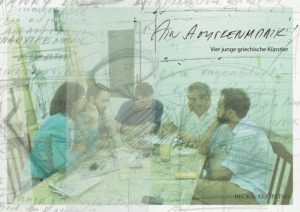 Four young and  talented Greek artists who left Thessaloniki for Düsseldorf,  Germany have been chosen by curator Apostolos Palavrakis to present their work in the Beck & Eggeling Gallery from Nov. 10-Dec. 22.

Entitled Ein Augenblick!, which means ‘a look’ in English or “Άιν Αουγκενμπλικ” as their invitation reads, the key subject of these four men’s exhibition is the “time” and how they understand and express it on canvas. Under this artistic umbrella, time is interpreted in many different ways and expressed via various techniques and materials.

Nikos Aslanidis is taking a close look at the course of time. His figures are not placed orderly in the time, and they describe the transition from one’s childhood into adulthood as a metamophosis.

Dimitris Ameladiotis took advantage of his artistic nature to catch the past. Using mixed materials, he created syntheses expressing his own idea of the past time, showing that a true artist could turn even the useless things into art.

As for Anastasis Stratakis’ artworks, the past plays an important role. He focuses on the power of memory using characters from the 19th Century. He presents them to the modern public in a rather humorous way, although he is rather using them as the background on which he builds his fictional stories.

Alkis Boutlis prefers painting mostly portraits. By depicting monster-like figures, he is making clear that time includes not only the past and one’s birth but also the moment before the death.