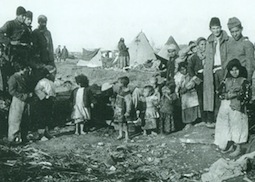 The presence of refugees in Thessaloniki, from 1912 until today was the topic of a conference from Nov. 23-25 on the city’s past as a refugee capital, organized with the help of the historical archive, IAPE.
The conference was held at the Melina Mercouri Theatre in Kalamaria as part of celebrations marking the 100th anniversary of the liberation of Thessaloniki and to identify the multiple roles of refugees in Thessaloniki.
During the meeting, 57 scientists from universities and research centers in Greece and abroad (Great Britain, France, Belgium, the USA, Turkey, Serbia,) presented their work on issues such as the refugees in the 1910’s, the role of the local press to fix their problems, refugees of the 1930’s, and charity and social integration, from the 1940’s to the 1980s.