The first researcher, who questioned the prevailing theory that Ulysses wandered the Mediterranean Sea for years before the gods allowed him to set foot once again on his beloved Ithaca, was an American historian from Chicago, Henriette Mertz.
In 1964, Mertz suggested with conviction in her book The Wine Dark Sea: Homer’s Heroic Epic of the North Atlantic that Ulysses, in many of the adventures described in Homer’s epic The Odyssey went outside the Mediterranean.
Based on her research and explorations in North America, Mertz proposed that Ulysses had reached the shores of North America with the help of the sea currents.
Mertz studied the speed of sea currents in conjunction with the time it took Ulysses to travel from one place to the other, reading carefully through Homer’s original descriptions and observations. She said she identified the exact locations Ulysses visited in the then unknown part of the world, which have lately revealed archaeological treasures dating back to the ancient Greek hero’s time.
Mertz took her research one step further and designed a detailed chart containing all of Ulysses’ journey stations after the fall of Troy and on his way back home. The map points out the island of the Sirens, the exact point on the American coastline that harbored the sea monsters Scylla and Charybdis, and the actual sea route Ulysses took to get back to Ithaca (assisted all the way by the powerful and swift current of the Gulf Stream). 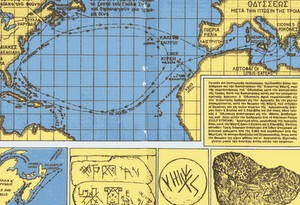 The study of Siegfried Petrides in 1994, Odyssey – a Naval Epic of the Greeks in America, came to strengthen Mertz’s findings and proposals. According to Petrides, the Greeks have a naval history that starts from at least 7250 B.C. as proved by the findings in Frachthi cave in Argolida.
“… The uniqueness of the Greek geographical area, namely its location in the relatively small Aegean Sea with its hundreds of islands, allowed the prehistoric Greek inhabitants to develop the technology of sea communications very early. Over the years and with the accumulated experience of sea voyages, sailors from the Aegean became more brave and started sailing off to the North and the Black Sea, to the South in Egypt and Phoenicia, and to the West to Italy and the Iberian Peninsula.
“They discovered that the sea they had been sailing was everywhere surrounded by land and had only one exit. They did not hesitate to leave the familiar waters and travel to the North in order to get precious metals, and they did the same westwards as well” he wrote.
The Greek literature is rich in references of the geographical and astronomical knowledge of the ancient Greeks, which allowed them to use the constellations for directions. In his study, Petrides also presented data on the geographic knowledge of areas, such as the North (hyper north), the East (Asia), the Southern (Ethiopia, Cyrenaica, Egypt, the rest of North Africa) and nd the West (Italy, islands west of Italy – Sardinia, Corsica, Elba, Capri, Ischia – the Iberian Peninsula, France, north-east Europe, Britain and Ireland. These references can be easily found in Homer’s epic (Rhapsody 5, 273).
Petrides’ said his long experience as a sailor and his study findings allowed him to confirm and correct wherever necessary the conclusion of Mertz providing extra details on the wind direction, sea routes, description of the islands etc. He suggests in his book, unlike Mertz, that the ancient Greek sailors did not rely on mere chance to have reached the American shores but owned fast and flexible vessels that could easily navigate through the Atlantic. They also knew perfectly well how to take advantage of both the sails and the rows, which enabled them to cover long distances.
(The images and text cited are taken from the book of S. Petrides)