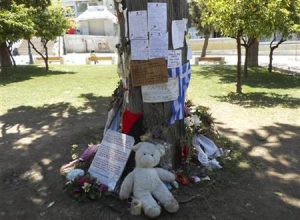 Suicides in Greece, which used to have the lowest rate in Europe, are rising rapidly and coincide with crushing austerity measures that have driven 20 percent of the population into poverty.
Public Order Minister Nikos Dendias, on a request from Coalition of the Radical Left (SYRIZA) lawmakers, told Parliament the rate increased between 2009-11. The first pay cuts, tax hikes and slashed pensions were imposed in 2010 but Greece has been in a recession for five years, with 25.1 percent unemployment and more than 68,000 stores closed.
More than 2,500 people have taken their own lives and attempted suicides are also soaring. Just this month, a young nurse who lost her job jumped out a window to her death. The first four months of this year saw a surge in the number of suicides among the poor and those older than 65. It has risen by more than 33 percent against the same period for 2011, with some 700 people taking their lives since January 1.
Before the financial crisis began, Greece’s suicide rate was only 2.8 per 100,000 inhabitants, according to the European Union’s statistics agency Eurostat. Earlier this year the German news magazine Der Spiegel wrote that, “Most of the suicides were among members of the middle class and, in many cases, the act itself was carried out in public, almost as if it were a theatrical performance.”
A former minister whose name was on a list of suspected tax evaders killed himself this year and people have killed themselves by jumping off balconies, hanging, and other methods. The use of anti-depressants has also jumped some 25 percent, officials said. The most publicized was that of a 77-year-old pensioner who shot himself in the head under a tree in Syntagma Square earlier this year.
Health officials said that not all the suicides were related to the economic crisis but noted the rise came at the same time many people were being pushed into desperate circumstances.
(Sources: Kathimerini, UK Daily Mail, Der Spiegel)