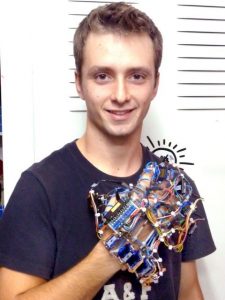 A 17-year-old student has been awarded a special prize from UNICEF for his innovative invention for people with kinetic problems to the upper limps. Harris Ioannou created a special iron glove which can be useful and improve the quality of life for people with such problems.
The machine weighs only 350 grams, works with the help of pressure sensors that can indicate when the person who wears it tries to move his hand. Then the system give commands to engine to move the hand with a lifting capacity of 17 kilos, or 37.4 pounds.
Ioannou came up with this idea two tears ago, after seeing his grandmother suffering from kinetic problems that made her unable even to pick up the remote control, and it took him 18 months to finish it.  His interest in inventions started early, and often failed, but he was persistent.
”I tried to create a program to open the switches of my house through the Internet,” he says. “I tried it to the garage door and i destroyed it,’ he said. The iron glove is still in experimental phase and there is much to be done yet, he said, but the first tests are positive, he added. He also has won the the first Eupopean Prize of Mechanics at Slovakia.