Byzantium After Byzantium Shows in Montreal 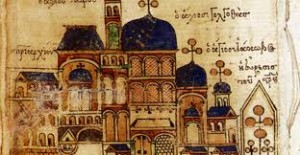 The much appraised documentary entitled Byzantium after Byzantium by historian and researcher Erato Pari, founder and director of the International Center for Hellenic Research, based in Nice, France, was first screened at the Montreal Centre for Greek Studies of the University of Montreal under the aegis of the General Consulate of Greece to Montreal.

After a successful course in various cities including Istanbul, Mumbai, Calcutta, Alexandria, Bucharest, Iasi, Odessa, Moscow, London, Munich, Paris, Marseille, Athens, Syros and Chios, the 53-minute long documentary was well received and stirred memories among the Greek-Canadians of their Greek cities and hometowns.

The documentary aims at revealing the major contribution of a specific elite, the Greek Phanariotes or Byzantine and post-Byzantine families, in shaping and reconstructing European and international identity in the East and West from the 15th to the 21st century, on a cultural, economic, historical, linguistic, political, financial, religious and social level.

The screening of the documentary (Greek language with French subtitles) was organized by the Montreal Centre and the Hellenic Canadian Association of Constantinople.