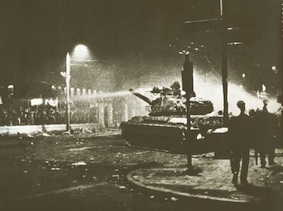 Greek-American organizations in New York celebrated the anniversary of the 1973 Athens Polytechnic uprising of students against the ruling military junta. A symbolic ceremony was organized at the Stathakio Cultural Center of Federation of Hellenic Societies in Astoria by several groups.

The Consul General in New York, George Iliopoulos, referred to the historic importance of the anniversary and the lessons learned. The event was followed by a documentary screening regarding the Polytechnic demonstration as well as cultural program including musical performances such as Panos Chrysovergis, Terry Vakirtzoglou, Kostas Baltazanis, Stratos Ahlatis and Panagiotis Andreou.

The event was attended by Panayiotis Kouroumplis, a member of Greece’s major opposition party, the Coalition of the Radical Left (SYRIZA) and the Consul of Greece, Evaggelos Kiriakopoulos.

The Athens Polytechnic uprising was a massive demonstration of popular rejection of the Greek military junta of 1967-1974 and began on Nov. 14, 1973, escalated to an open anti-junta revolt and ended in bloodshed in the early morning of November 17 after a series of events starting with a tank crashing through the gates of the Polytechnic.

Pfizer’s Investment in Thessaloniki a “Historic Moment” for Greece