Growing Worry Over Depression in Greece 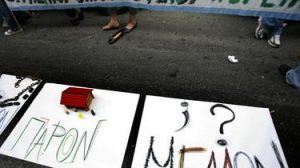 The World Association of Psychosocial Rehabilitation has focused on Greece and the effects of austerity after almost three years of deep budget cuts.

The 11th Congress of the organization took place in Milan, Italy and was focused on psychological health in Greece and the way health institutions operate after the huge cuts. The general assembly supported a resolution which condemns huge cuts in health care services and urged Europe to to provide more help to Greece during its economic and humanitarian crisis.

According to articles published in the Italian press, depression rose by 300% in Greece, suicides by 17% and attempted suicides by 37%. Dr. Stelios Stylianidis, a Professor of Psychology at Panteion University in Athens stated that 50% cuts in health care services create great danger for people affected my mental diseases.

He also said that those who dictate the economic policy in Greece, the Troika, and the government do not care about the people who use mental health services, their families of the people who work in the sector. “We have to face the issue in the European level, otherwise the same thing might happen in other countries, like Italy, Spain or Portugal,” he underlined.

In it’s resolution, the general assembly noted that only 4% of the EU budgett for mental health has been absorbed so far. The amount of money not being used by health services will be refunded in the EU budget, the European Commission has warned.