TechNews
GreekReporter.com Greece What is Greece Celebrating the 17th of November?

What is Greece Celebrating the 17th of November? 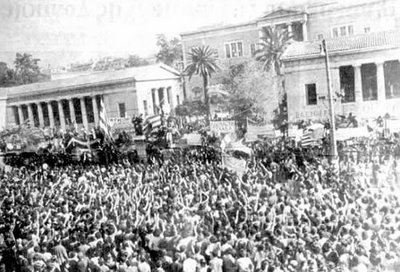 By Eleni Velonaki
On the 17th of November, the mind and our heart is at the University of Athens or else know as ”Politexneion”. It’s been 39 years since the heroic uprising of students, the youth and the entire Greek nation against tyranny, in November 1973. The University symbolizes not only the heroic struggle but the unity of all democrats. The celebrations of the day are dedicated to the seven years of fighting dictatorship and one of the most important moments of the hazard of our people’s and the youth’s freedom. The ideals of freedom, independence, peace, love for life and people, are alive and remain relevant and unchanged, many years after that uprising. Always live to empower the youth.
The University has been and always will be a live call to democracy, humanity and freedom. ”The Politechnion is alive!”
The causes of the revolt: Greece was from April 21, 1967 under the dictatorial rule of the military, a regime which had abolished civil liberties, had dissolved the political parties and had been exiled, imprisoned and tortured politicians and citizens on the basis of political beliefs.
In 1973, the leader of the dictatorship,  begins a process of liberalization of the regime, which included the release of political prisoners and the partial lifting of censorship, which promises a new constitution and elections on February 10, 1974 to return to political governance. Opposition leaders, were thus able to start political action against the junta.
The junta, trying to control every aspect of politics, was involved in student unionism in 1967, banning student elections in universities recruiting students mandatory and imposing unelected leaders of student clubs in the National Student Enosi Elladas (EFEE). These actions are naturally created intense feelings of dictatorship to students, such as Geology student Kostas Georgakis, who set himself ablaze public in 1970 in Genoa, Italy as a protest to the junta.
With this exception, the first massive public protest against junta came from students on February 21st, 1973. The riots started a little earlier, on the 5th of February, when students of the University decided not to attend their lectures. On the 13th of February a huge demonstration took place in Athens and the junta violate the university asylum and ordered the police to intervene. Eleven students were arrested and referred to trial. On the occasion of these events, on February 21, about 3-4000 students of the Law School of Athens University occupied the building of the school in the center of Athens on the road Solonos, and requested revocation of the 1347 county imposed conscription “new reactionaries”. At that time 88 fellow students had already been recruited by force. From the roof of the building the students were reciting the following oath: 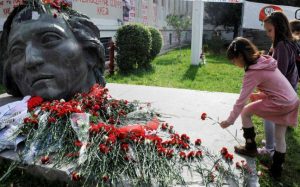 “We students of the Higher Education Institutions swear to the name of freedom and we must fight to the end to ensure our:  a) academic freedoms, b) university asylum, c) the withdrawal of all repressive laws and ordinances.”
The police was ordered to intervene and many students in surrounding streets were brutalized by the police,  but succeeded to compromise the University Asylum. The events at the Law school are often cited as a precursor of the Polytechnic uprising. The student arousal was also affected significantly by the youth movements of the ’60s, and especially since the events of May ’68.
Despite the harsh repressive measures coup, imprisonments, deportations, collective trials in emergency military, torture, mock executions and murders, were the constant anti-dictatorship demonstrations of the Greek people throughout seven-year dictatorship, always leading with the untamed youth.
Since the march in 1973, every year students in Greece gather outside the ”Politechnion”, in the same street, and protest in order to support and honor those arrested on Nov. 8th. It is a way of keeping in mind that students many years ago had the courage to fight for their beliefs and their aspirations and besides the losses they won.

Greece will honor Haiti for being the first nation in the world to recognize Greek independence from the Ottoman Empire in 1821.
Education