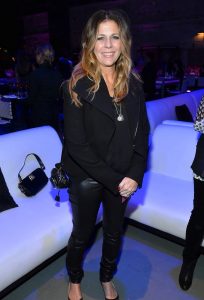 Tons of Hollywood celebrities gathered together at Sony Studios Monday night to support breast cancer awareness at the “Power of Pink” event.

Rita Wilson, who just turned 56, lent a helping hand by drawing raffles inside the pink-lit studio. Tickets, which ranged between $400 and $10,000, benefit the Margie Peterson Breast Center at Saint John’s Health Center.

Wilson is an avid-supporter of breast cancer awareness. She and her husband Tom Hanks, as well as Steven Spielberg and his wife Kate Capshaw, created the Women’s Cancer Research Fund in which they serve as Honorary Chairs. The Fund is a leading charity in Hollywood that addresses the issue of cancer and the urgent need to develop new ways of early detection in addition to treating and preventing it. The Greek-American actress/singer also took to her Twitter account recently to promote a Carolina Herrera t-shirt that helps fund research for a cure.

In addition to Wilson, Melanie Griffith also drew from the raffle at the event and music star P!nk performed for attendees.