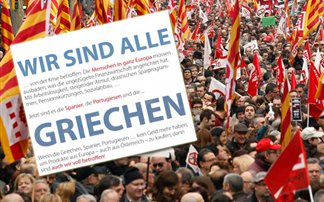 In the context of the “European Action against austerity policies”, the two trade unions ADEDY and GSEE have called a nationwide work stoppage from noon until the end of the shift on Wednesday and a protest rally in Klafthmonos Square in downtown Athens. Forty labour organizations in 23 European countries will participate in the mobilization. Public transport services were scheduled to run on Wednesday, with the exception of the Syntagma Square metro station which was expected to close its doors at noon.
Journalists are also participating in the stoppage from noon to 3 p.m. The labour unions in Portugal and Spain have declared a 24-hour general strike while in Austria the labour unions will distribute leaflets to the citizens with the slogan “We are all Greeks”. A four-hour work stoppage will also be held in Italy while demonstrations have been scheduled in France, Germany, the Netherlands, Britain, Bulgaria, Romania, Slovenia, Sweden and Finland.
(source: ANSA)