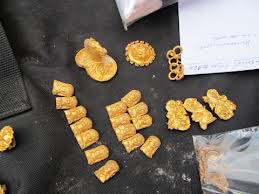 Bulgarian archaeologists have discovered ancient golden artifacts in the biggest of 150 ancient Thracian tombs belonging to the tribe of Getae, some 400 kilometers (248 miles) northeast of Sofia. According to Reuters, the excavations brought to light golden bracelets with snake heads, a tiara with animal motifs and a horse head piece.

The items dating back to end of the 4th or begining of the 3rd Century B.C. also include 44 female figurines, 100 golden buttons and a golden ring. The Getae was the name given by the Greeks to several Thracian tribes inhabiting the regions to either side of the Lower Danube, in what is today northern Bulgaria and Romania.

This was a hinterland of Greek colonies on the Black Sea coast, bringing the Getae into contact with the Ancient Greeks from an early date. “These are amazing findings from the apogee of the rule of the Getae,” Diana Gergova, head of the Bulgarian team of archaeologists and researcher of the Sofia-based National Archaeology Institute told Reuters.

One of the tombs in the Getic necropolis, known as the Tomb of Sveshtari (the name of the nearby village) is also included in the World Heritage List of UNESCO for its unique architecture and craftings.