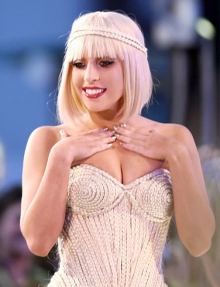 Lady Gaga superfans are now being given the chance to get their hands on a piece of their idol’s vast wardrobe – if their pockets are deep enough.Some of the more eccentric creations ever worn by Lady Gaga go under the hammer on Dec. 1.

A clear rubber mask, two hats, and the the shimmering – and rather revealing – Ecstasy gown Created by Greek designer Eddie Gavriilidis, are some of the eccentric’s star items be included in the auction Julien’s Icons and Idols 2012: Rock ‘n’ Collection.

Gavriilidis is a stunning piece, embellished with more than 50 individual laser cut tan-and-gold python leather pieces.With a starting price of $5,000, the gown is expected to sell for $10,000 to $12,000. It even has a speck of the pop star’s blood on it from where she was accidentally cut on the arm by an overzealous fan whilst wearing it.

The auction is organized by Julien’s Saleroom in Beverly Hills and will last for only two days. More than 450 pieces of music memorabilia from the 1930’s to today, will be up for grabs. Gaga’s gowns are expected to go for $20,000 or more.