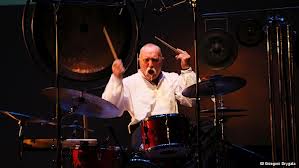 Well-known German musician Günter Baby Sommer accompanied by the famous singer Savina Giannatou, organized a concert titled Songs for Kommeno, dedicated to the memory of 317 Nazi holocaust victims in the village of Kommeno on August 16th, 1943. The concert took place in the most popular jazz club in Vienna. Savina Giannatou was accompanied by great musicians such as Evgenios Voulgaris, Spyros Kastanis and Floros Floridis.

According to Kulturstiftung des Bundes, in 2008 the percussionist Günter Baby Sommer attended a concert in the Greek village of Kommeno. While he was there, his hosts told him that the village of 600 inhabitants had been the site of a massacre during World War II. Soldiers of the German army executed over 300 civilians in August 1943. The stories told by the survivors of the massacre serve as the basis of Sommers’ latest music project Kommeno. Together with four Greek musicians, he recorded a CD of newly arranged songs which were sung in the village at that time in history.

As an ambassador of a different Germany, Günter Baby Sommer was dubbed an honorary municipal member of Kommeno .