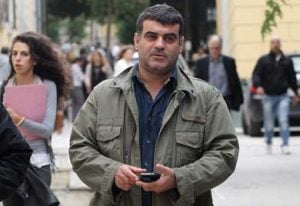 A Greek journalist acquitted of violating privacy laws for publishing a list of 2,059 depositors with $1.95 billion in a Swiss bank being kept secret by the government, said the country’s political and rich are trying to muzzle the press to cover up chronic corruption.
“The main problem in Greece is the people who govern it. It is a closed group, an elite, one part of which is composed of people from all the parties and the second connected directly or indirectly to business people,” he told Reuters in an interview.
He said politicians tried to hide the list and after he was arrested he said many in the Greek media ignored his case because they are in bed with the people they cover. It’s not uncommon for Greek reporters to work on the side for political parties and business interests, and many Greek newspapers are  aligned with political interests and receive big government advertisements. He said the government should have checked the list for possible tax evaders.
Vaxevanis said it was the foreign press that really highlighted his case and the list, that includes politicians, shipowners, doctors, lawyers and housewives. “The list went out. They arrested me. They tried me, and there was nothing on the TV channels,” he said. “It is a huge issue for freedom of press and the Greek channels didn’t show anything.”
Vaxevanis was arrested the day after he released the list on his web site and magazine Hot Doc and tried three days later. People charged with tax evasion sometimes don’t face a court for 10 years although they owe more than $70 billion while the country is undergoing a crushing economic crisis and is ready to hit workers, pensioners and the poor with another wave of pay cuts, tax hikes and slashed pensions.
Vaxevanis, a 46-year-old father of two, told Reuters that his failed prosecution was an effort to protect the rich from the same kind of pain that five years of recession has given middle-class Greeks. “Our politicians go abroad, they even mock our lenders, and people are called to pay the bill once again,” he said.
The former host of an investigative journalism show called Pandora’s Box, Vaxevanis said he was undaunted by the arrest and his next issue would again be on the list, analyzing the connections of the names it holds. He did not list how much each depositor had, which he said prevented him from violating their privacy.
He said an anonymous source gave him the so-called “Lagarde List” – named after International Monetary Fund director Christine Lagarde who handed it to Athens when she was French finance minister in 2010. The IMF, along with the European Union and European Central Bank make up the Troika lending Greece $325 billion in two bailouts. Since then three governments have had access to the list but authorities have yet to jail a single big name for tax evasion. Current Finance Minister Yiannis Stournaras is the first to show any interest in pursuing an investigation.
A HOT POTATO
PASOK Socialist leader Evangelos Venizelos, one of Prime Minister Antonis Samaras’ two coalition partners, had a copy of the list when he was finance minister but wouldn’t act on it because he said it had come from a CD of stolen data, although Lagarde said other European countries had used it to hunt tax cheats.
On Nov. 2, a Greek court official said the financial crimes prosecutor would submit a case to Parliament so it could start an investigation into former finance ministers George Papaconstantinou and Venizelos, who could face obstruction of justice charges, although it seems unlikely as Greek lawmakers have been known to protect each other and political prosecutions are rare in Greece.
While photos and videos of Vaxevenis went around the world and the foreign press gave extensive coverage to a case seen as a test of media freedom, there was almost no coverage on Greek television and Greek newspapers relegated it to back page news.
Vaxevanis has also charged the Greek press is more interested in getting money from government ads than covering politics or scandals, and much of the Greek media is owned by intertwining business interests that have investments besides their newspaper, television and radio holdings. “It is terrible that during the junta people listened to Deutsche Welle and the BBC secretly to find out what happened in Greece,” he said, referring to the 1967-1974 military junta. “And we’re at the same spot. Greeks are watching foreign media to learn about Greece.”
Vaxevanis said he hoped his acquittal would give courage to other media and said other journalists had called him secretly to support him instead of writing stories about his trial. Britain’s Independent described Vaxevanis as A Greek Hero for Our Times. But Greek daily Ta Nea, which had reprinted the list across 10 pages of its Monday edition, devoted five short paragraphs.
Othon Anastasakis, Director of the European Studies Centre at Britain’s Oxford University, told Reuters that the lack of coverage in Greek media showed a twisted link between business, media and politics in Greece. “It’s highly probable given the fact that this is not being reported as front page news even though it’s very important,” he said. “You do have control of the press now. The press is being entangled with big business and political interests.”