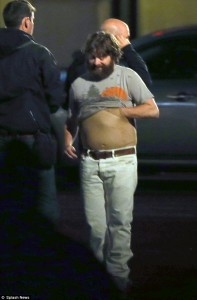 No, no… don’t be scared …. Zach remains faithful to his diet. The comedic actor Zach Galifianakis was spotted shooting a scene for Hangover III, in Las Vegas, Nevada where onlookers couldn’t help noticing the protruding stomach. He was chatting to a crew member and pulled up his T-shirt, only to reveal his big belly, but it was soon realized that it was a prop, and a realistic one indeed.

The 43-year-old star, who gave us big laughs in the first two Hangover movies, when he weighed a lot more, has since lost his mid-section flab. On Live with Kelly last July, he revealed that he has given up “the good old days” and admitted that his diet secret was, in fact, very simple: he stopped drinking beer, adding that “…losing a few pounds is easy when you stop drinking 20 beers a night”.

Galifianakis reprises his role as Alan in Hangover III and joins his fellow co-stars Justin Bartha, Bradley Cooper, Mike Epps and Ed Helms. Heather Graham is also re-appearing in the film as well as Gillian Vigman, Jamie Chung and John Goodman. Hangover III will be released on May 24. Hanover I got strong reviews but the sequel was largely seen as inferior.