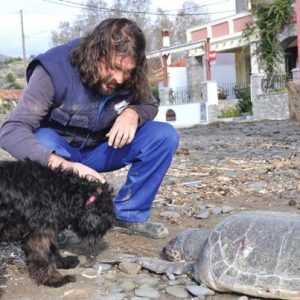 Makridakis was born in Chios in 1971 and studied mathematics. He organizes research and educational programs while editing publications for the Chios Studies Centre, which he founded in 1997.

He edits the three-monthly magazine Pelinnaio and has published two books on the history of Chios. His first novel Anamisis Denekes, published by Hestia in 2008, is already in its fourth edition and translated into Turkish.

However, Foreign Correspondent’s interest did not only focus on the writer Makridakis, but also on why he chose to leave the city and settle  instead in a village, cultivate the land and find alternative solutions to the economic crisis his country is dealing with.

Williams said that Makridakis, an activist from Chios, a researcher, writer, historian and  author, impressed with his opinions and general attitude toward life. The show will be broadcast this month in Australia.