Turkish-Greek Concert in Marmaris For Friendship 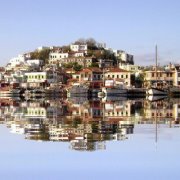 The  Mugla Marmaris chamber orchestra and Greek musicians hosted a concert of friendship in the Mediterranian port of Marmaris, southwestern province of Turkey.

Orchestra President Altınöz Ahmet Yasar said that within the framework of theTurkish-Greek friendship and co-operation that concerts will continue to be given in the hopes that art and music can constitute an important link between the countries.