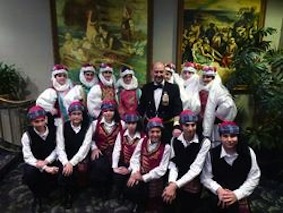 Stavridis’s grandparents were from a village outside modern Izmir (Smyrna) a Greek village depicted in Dido Sotiriou’s Matomena Homata. A love for the Greek classics, modern poetry and ancient military strategy was evident throughout his conversations. Patriotism, devotion to family and respect for his Greek heritage are part of his personality.

During the ceremony, Stavridis delivered an emotional speech including many references to the Nobel Prize Poets. He also referred to the role of Greece, as a member state of NATO in the Mediterranean Sea and Middle East, highlighting Greece’s contribution to the recent wars in Iraq and Afghanistan.

Stavros Haviaras, the new President of Chian Federation said, “It is a pleasure and honor for Greek community around the world the fact that there are Greek people dedicated to such services and offering help to humanity.” The Dance Group of the Women’s Auxiliary of the Chian Federation performed a number of traditional Greek dances.

The funds from this ceremony and those following will be donated to the Help Chios Relief Fund, which gives $5,000 dollars for the soup kitchen in Chios every month. Stavridis holds various decorations and awards, including two awards of the Defense Distinguished Service Medal, the Defense Superior Service Medal and five awards of the Legion of Merit.