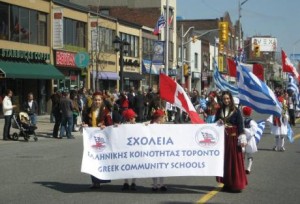 Despite heavy rain Toronto hosted an Oxi Day Parade on Oct. 28 before an audience that included the Consulate General of Greece in Toronto Dimitris Azemopoulos, and other officials of Toronto’s Greek community as well.

A thanksgiving was marked at the Church of  St. Demetrios, where Azemopoulos and students gathered. Celebrations of the National Oxi Day followed, organized by the Vergina association.

Within the same framework in Montreal, a thanksgiving was marked at  St. George’s Cathedral before an audience that included the Consulate General of Greece in Montreal Thanos Kafopoulos, the Honorary Consul of Cypus Michalis Paidousis and other organizations and associations from across the Diaspora communities. A celebratory meal followed and the occasion was marked by Greater Montreal’s Greek Community.