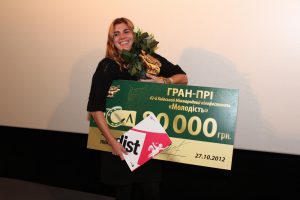 The Greek film L, by director Babis Makridis, won the Grand Prix of the International Film Festival Molodist,  in the Ukrainian capital Kiev on Oct. 28. According to The Hollywood Reporter,the movie was awarded The Golden Scythian Deer, which comes with a cash prize of 80,000 Ukrainian hryvnas ($10,000).

The film was written by Makridis and Efthimis Filippou, based on an original idea by Yorgos Giokas. In January this year, it became was the first Greek movie selected to compete at the Sundance Film Festival.

L is the simple story of a 40-year-old man who lives in his car but spends his free time with his wife and family, who meet him at specified times in parking lots. He then gets a job to bring honey to a 50-year old man. A New Driver shows up and the Man gets fired. The Man’s life changes and he finds it absurd that no one trusts him anymore.

The low-budget comedy Gimme the Loot by American director Adam Leon was awarded as the international competition’s best movie, and the star Ту Hickson was given a special mention.Molodist Film Festival special mention went also to Turkish actress Begum Akkaya for her role in Kuma by Umut Dag.