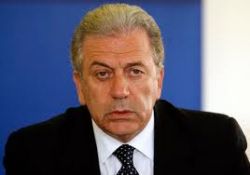 With Hurricane Sandy causing a state of emergency along the United States’ northeast coast,  Greek Foreign Minister Dimitris Avramopoulos has been forced to cancel a planned trip to America and Canada, including a stop in New York.

The storm led emergency management authorities to close airports and other transport routes as the storm bore down, with 75 mile-per-hour winds and heavy seas slamming into the coastline from Florida to New England.

The minister’s office said the trip would have to be rescheduled but did not give any dates.