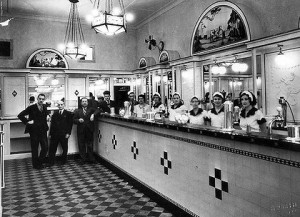 Joachim Tavlaridis’ legendary milk bar in Australia turns 80 years old. Tavlaridis – who later adopted the name Mick Adams – migrated from Greece at the age of 14, shortly before the Asia Minor Catastrophe in 1922. He started by working odd jobs in restaurants and butcher shops to save up enough money to build his own business.

According to Macquarie University academics Leonard Janiszewski’s and Effy Alexakis’s research, Greek migrant Tavlaridis was the first businessman to open the traditional milk bar after he set up the Black and White 4d. Milk Bar in Sydney’s Martin Place, in November 1932.

“Who would have thought 20 years ago that Greeks coming to Australia … would change our eating habits, change technology within popular eating houses and change the direction we are going into?” Janiszewski asks.

The milk bar was a huge success and so Tavlaridis went on to open several more Black & White Milk Bars in Sydney, Adelaide, Brisbane, Melbourne & Wollongong. In only a few years, 4,000 other milk bars opened across the country, in New Zealand and other countries in the region as well. For many decades Australian milk bars were simply a Greek story, but they couldn’t get enough of milk shakes.