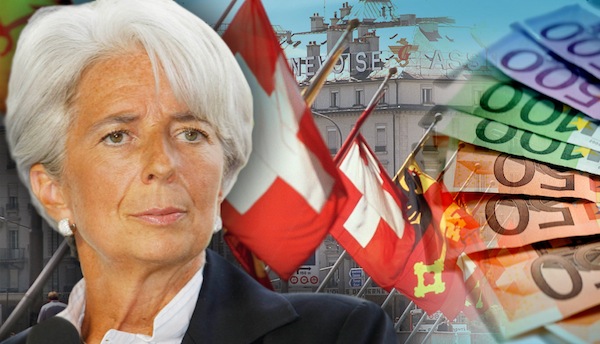 A closely-kept secret by the Greek government – the names of 1,991 people who made $1.95 billion in deposits in the Geneva, Switzerland HSBC bank branch – has been released by a Greek investigative journalist and immediately went viral on the Internet, listing several politicians, an advisor to Prime Minister Antonis Samaras, well-known businessmen, journalists, doctors, lawyers and engineers, actors and civil servants – some of them working at the Finance Ministry.

The list contains also the names of three former ministers, of whom one died sometime ago. Also the names of owners of enterprises that have gone bankrupt. But also students studying abroad, pensioners and housewives.


The names were said to come from an original list given by former French Finance Minister Christine Lagarde – now the head of the International Monetary Fund, one of Greece’s Troika of international lenders – to former Greek Finance Minister George Papaconstantinou who said he lost them.
That prompted his successor, Evangelos Venizelos, now the current head of the PASOK Socialists, to produce a copy he said he had on a memory stick and set off an investigation by Greek prosecutors as to whether any of those listed had evaded taxes. It’s not unlawful for Greeks to have accounts in another country as long as they are declared and taxes are paid on them.
Greek authorities did not confirm that the list printed on Oct. 27 in Hot Doc, a weekly magazine published by investigative journalist Costas Vaxevanis, were those on the Lagarde list, given to Greece in 2010 as part of a longer list on a CD that came from stolen records from the bank, the reason Venizelos said he never acted on it, although Lagarde said other countries who found names of their citizens have used it to prosecute tax cheats.
Neither Papaconstantinou nor Venizelos indicated there were any politicians on the list and the government wanted the names kept secret as Samaras is proceeding with a $17.45 billion spending cut and tax hike plan while tax evaders who owe the country $70 billion have largely escaped Greece’s crushing economic crisis. The plan includes more pay cuts, tax hikes and slashed pensions affecting workers, pensioners and the poor while Greece’s politicians, rich elite and tax heats have been relatively unaffected.
The embarrassing release came only a day after Supreme Court deputy prosecutor Nikos Pantelis asked for Parliament to be briefed regarding any politicians on list. Former minister Giorgos Voulgarakis, from Samaras’ New Democracy Conservatives, whose name is on the list, said it was “disinformation” and “mudslinging” and declared via his Twitter account, “Neither my wife nor I have any offshore companies or foreign bank accounts.”
BURN AFTER READING
Not only Greeks but also name of foreign nationals are on the list – apparently having transferred money to HSBC from Greek banks. Hot Doc stressed that people on the list should not be considered tax evaders unless it is proved they did not pay taxes on the deposits.
But it said: “It is apparent that a large portion of deposits are not justified with the income of depositors. Proof is that most accounts were closed after the bank briefed on the data leaking.” Vaxevanis wrote that he had received the list content on a USB memory stick “by somebody” who wrote to HOT DOC that s/he “believed that the list has been misused for political and economic purposes for two years.”
The HSBC data were stolen by former bank employee Herve Falciani in 2007.  While countries like France, UK and Germany pursued tax evaders, Greece kept moving it from one place to another until Papaconstantinou said it was lost, and he blamed his aides and it became apparent that no politician wanted to get involved.
There was no immediate reaction from the government, which is rushing to finalize the new austerity plan and ram it through Parliament before a meeting of Eurozone finance ministers on Nov. 14 so that a pending $38.8 billion loan installment can be released.
The Hot Doc website stated:  “Our controls led to the conclusion that this is the list of Greek depositors to HSBC until 2007 when the leak started. So this list was identical to the Lagarde-List. But we cannot check if this is the (original) list received by Papaconstantinou or a list being formed later after the removal of some names in an potential attempt to hide evidence.”
Until now, one journalist said that he had no bank account abroad and a well-known lawyer declared that his family had transferred money abroad in the late 1980’ss to cover surgery expenses for a family member. Another journalist said he had no money abroad at that time, while a former New Democracy minister and his wife dismissed any connection to the list. While the Hot Doc list did not show how much money was deposited by each individual, that information was reportedly on the original list.