No Job, No Health Care, Left to Die 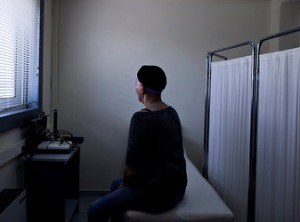 Highlighting just how hard life is in Greece for many people where nearly two million are out of work, the New York Times, in a front-page story, recounted the story of a jobless woman named Elena, who was diagnosed with breast cancer but has had trouble getting care for her disease despite the Socialist system of health care.
The head of Greece’s largest oncology department at Sotiria General Hospital, Dr. Kostas Syrigos talked about her case. She was diagnosed a year before she saw him. “When we saw, we were speechless. Everyone was crying. Things like that are described in textbooks, but you never see them because until now, anybody who got sick in this country could always get help.”
Elena used to work as a teacher, but was forced to resign so as to take care of her parents, who had cancer. After they passed away, she was diagnosed with breast cancer but without a job she didn’t have health care insurance either as the Greek system requires showing enough work to produce eligibility.
At 58, she was told that the treatments would cost at least 30,000 euros, and by that time all her family’s funds were depleted. Without any money, she was desperately trying to sell her assets but no one was buying because of the country’s economic crisis. Without any treatment, the cancer was spreading, leaving her with little hope because the government refused to cover her and she was being left to die.
That’s when Syrigos and other doctors came to her aid and provided the treatment she can’t pay for at a time when tax cheats who are costing the country $70 billion have largely escaped sacrifice. The Times reported that some 1.2 million unemployed in Greece whose benefits have run out face the same prospects if they become ill, being left on their own in a country which prided itself on health care for all.