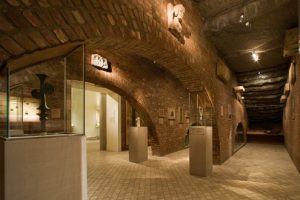 The Art Institute of Chicago will open its new Mary and Michael Jaharis Galleries of Greek, Roman, and Byzantine Art on Nov 11, displaying 550 works, made possible through a $10 million donation from the philanthropic couple.

Among the exhibits at the institute are more than 150 magnificent loans from private collections and public institutions around the world. This inaugural display allows the Art Institute to present marble sculptures of gods, emperors portraits, dazzling jewelry, shiny silver tableware, pottery and many other items.

A chronological display will follow from beautifully decorated Greek vases and precious metals of the Hellenistic period to Etruscan bronze and terracotta, to the opulent décor and realistic portraiture of Rome as well as the Byzantine art developed under the growing power of the Christian Church.

Also, 51 of the finest Byzantine and Roman artworks will be featured in the Late Roman and Early Byzantine Treasures from the British Museum exhibition. The institute benefited from one of the largest donations to the arts. Mary Jaharis studied Fine Arts there and is a member of its tax office.  Thanks to their donation the galleries have been renovated and expanded to bring Greek, Roman and Byzantine Art together.

Michael Jaharis is Vice Chairman of the Greek Orthodox Archdiocese of America and founder of  Faith: An Endowment For Orthodoxy and Hellenism. The couple has made numerous charitable contributions to museums, institutions and foundations, including the Metropolitan Museum of Art in New York.