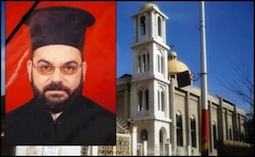 The body of the Greek Orthodox priest Fr. Fadi Jamil Haddad, was found today in the Jaramana neighborhood (north of Damascus ) near the place where he was kidnapped on October 19th, by an unidentified armed group. Father Haddad served the St Elie parish in Qatana, a mixed Christian and Muslim town of 15,000 inhabitants, 20 kilometers ( 12 miles ) west of Damascus .

This was confirmed by Fr. Haddad’s Greek-Orthodox confrere, who asked for anonymity. “His body was horribly tortured and his eyes gouged out,” he reported. “It is a purely terrorist act. Fr. Haddad is a martyr of our church. ” The kidnappers had asked the priest’s family and his church a ransom of 50 million Syrian pounds (over 550,000 euros). It was, however, impossible to find the money and meet this exorbitant demand.

The Orthodox Patriarchate condemned the savage crime and denounced attacks against civilians and religious figures who try to be messengers of peace under these difficult circumstances. He further called on humanitarian organisations and the public to condemn all crimes and robberies which undermine the safety of citizens.

The Syrian National Council, the main opposition bloc in exile, called Father Haddad a symbol of national unity and blamed pro-regime militiamen for his killing.