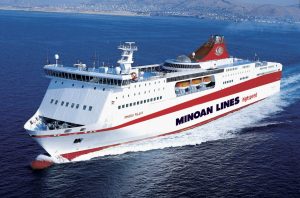 The Greek Minoan Lines said it will add a new terminal in Trieste, Italy as an extension to the existing  ferry Route Patras-Igoumenitsa, Ancona and return trips.

The Italian port will be connected with the company’s ferries with three departures a week from Italy and Greece, respectively. The addition of Trieste links the Greek line with a port that has travelers from northern Europe, particularly Germany, embarking from there,

There has also reportedly been interest in Minoan Line from transport companies in the Middle East,  mainly from Turkey, given that the Italian port is daily connected with Istanbul.

Minoan Lines, which is a member of the Grimaldi Group, states that the new sea link will be served by deployed cruise ferries of the company in the Ferry Line Patras – Igoumenitsa – Ancona, and will include Cruise Europa, Cruise Olympia, and the new Europea Link.