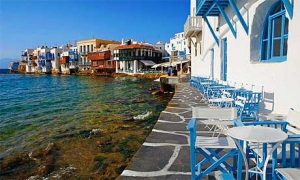 Greek Tourism Minister Olga Kefaloyanni, in an interview with the German newspaper Der Tagesspiegel, said that this year some 16 million visitors will come to Greece, better than expected during the crushing economic crisis, but still a downturn.

She said Greece will not leave the Eurozone and return to the drachma, even to benefit tourism, which she hopes will come back, although previous governments have failed to conduct comprehensive publicity campaigns.

Kefaloyanni said she was satisfied both over the ambience and the content of the meetings held in in Berlin,during her visit in response to an  invitation from the Financial Secretary, Tourism Responsible, Ernst Bourgmpacher.

Kefaloyianni repeatedly stressed that Greece remains a warm and welcoming destination and even referred to German tour operators statistics about their clients’ good experiences who visited Greece this year. She noted, in fact, that Germany is the largest market for the Greek Tourism Industry and stated the need to restore her country’s image abroad.

Concerning fears of some tour operators about Greece’s economic condition, which prompted them to put a clause in contracts concerning the acceptance of euros, she said that was not a normal practice and asked the German government to reinforce its support for Greece staying in the Eurozone.